The moon turned brownish orange earlier this year during this eclipse on April 15, as seen from Los Angeles. The second total lunar eclipse in a series of four takes place early Wednesday morning. (Gene Blevins/Reuters)

The full moon will darken and grow reddish tonight during a total lunar eclipse that may help a fall meteor shower shine.

At that time, the moon will darken to a colour that could vary from orange to brown to red. Lunar eclipses are sometimes called blood moons — particularly fitting, perhaps, for a Hunter’s moon shortly before Halloween.

The timing of tonight’s eclipse means that part of it will take place after moonset in Eastern Canada, but Western Canada should get a nice view. 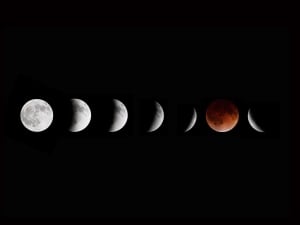 Multiple images of the moon are are seen in this illustration of the phases of the lunar eclipse over Winnipeg on April 15, 2014. A total lunar eclipse occurs when Earth casts its shadow over the moon. The lunar face can sometimes turn reddish, coppery-brown or orange, tinged by light from the sun that refracts as it passes through our atmosphere. (John Woods/Canadian Press)

This particular lunar eclipse could give skywatchers an additional treat, by bringing out the meteors of the Draconid meteor shower, which is expected to peak tonight. The annual fall meteor shower produces relatively few meteors compared to the summer’s Perseids, and the full moon is expected to wash out most of them. But the eclipse will temporarily darken the full moon and the night sky.

The Draconid meteors will appear to originate from the constellation Draco the Dragon, in the north to northwest sky.

Of course, the main event is still the eclipse.

“I get kind of excited about them because they’re really cool to watch,” Attwood said. “You’re seeing motion in the sky, you’re seeing it slowly creep into the Earth’s shadow.”

The best part is that they don’t require any special knowledge or equipment.

“Anyone who sees the moon can see the eclipse,” he said.

And unlike solar eclipses, they can be viewed without any eye protection.

“It’s perfectly safe to look at an eclipse of the moon with your regular eyes or binoculars.”

Because the eclipse takes place close to moonset in eastern Canada, Attwood recommends that viewers in eastern provinces scout out a spot with a clear view of the southwest horizon, so that trees and buildings don’t block their view.

Those in Western Canada will get a better view, but will probably need to set an alarm.

He recommends trying to photograph the moon with a zoom lens and, if possible, a tripod.

“Once the eclipse is total, then you may need an exposure of several seconds.”

The reason the moon turns reddish during a lunar eclipse is that during the event, the Earth’s shadow blocks almost all sunlight from hitting the moon. The exception is a small amount of light bent around the Earth by its atmosphere.

The atmosphere scatters most of the blue light, leaving only the red to hit the moon — causing it to appear red.

“It’s the same reason why the sky is blue… and why sunset is red,” Attwood said.

The amount of red colour depends on the weather in the part of the atmosphere the light is passing through, he added. If it’s clear, the moon will be brighter and redder, but if it’s stormy and cloudy, the moon will be darker and more brownish.

The final two total lunar eclipses of this tetrad will take place next April 4 and September 28.