Last I heard, as of Wednesday night, there were still a few ballots in Oregon that have not been accounted for regarding the food labeling mandate in that state. Apparently there were a lot of votes disqualified for various reasons and volunteers took to the phones and the streets to resolve those issues so voters could throw their full weight into  Measure 92.  Fingers crossed. Americans have GOT to wake up and stop falling for the big lies Big Ag pummels them with via the television at election time. 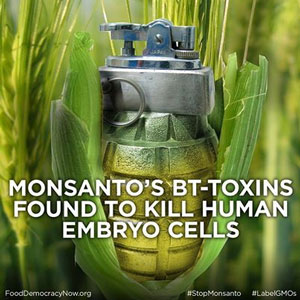 Meanwhile, Monsanto has filed a law suit because of the recent law in Hawai’i to ban GMO crops and that’s where they do most of their testing for American food. No surprise there. Read more here.

The following analysis comes to you from Dr. Richard Presser — “The Skeptical Bastard”.  LOL, Richard.

I congratulated Richard the other day because Google sees to it that his emails now end up in my spam folder. That’s when you know you’re sharing good information.  ~ BP

As per this article, Russia has banned all GMO products for 10 years. I quote:

If the Americans like to eat GMO products, let them eat it then. We don’t need to do that; we have enough space and opportunities to produce organic food.” –Medvedev

“It is necessary to ban GMOs, to impose moratorium (on) it for 10 years. While GMOs will be prohibited, we can plan experiments, tests, or maybe even new methods of research could be developed. It has been proven that not only in Russia, but also in many other countries in the world, GMOs are dangerous. Methods of obtaining the GMOs are not perfect, therefore, at this stage, all GMOs are dangerous. Consumption and use of GMOs obtained in such a way can lead to tumours, cancers and obesity among animals. Bio-technologies certainly should be developed, but GMOs should be stopped. We should stop it from spreading. ” – Irina Ermakova, VP of Russia’s National Association for Genetic Safety.

Tests conducted by Seralini using the same testing regime purportedly used by Monsanto showed clear evidence of tumour growth in rats. There was an outcry from over 100 scientists when Monsanto used their usual techniques to have the peer reviewed paper retracted.

But perhaps the worm is turning away from the efforts of the eugenics crowd, whose interests Monsanto and others support through their GMO foods, as one plank in a complex strategy to reduce the human population to under 0.5BN people, amongst other things.