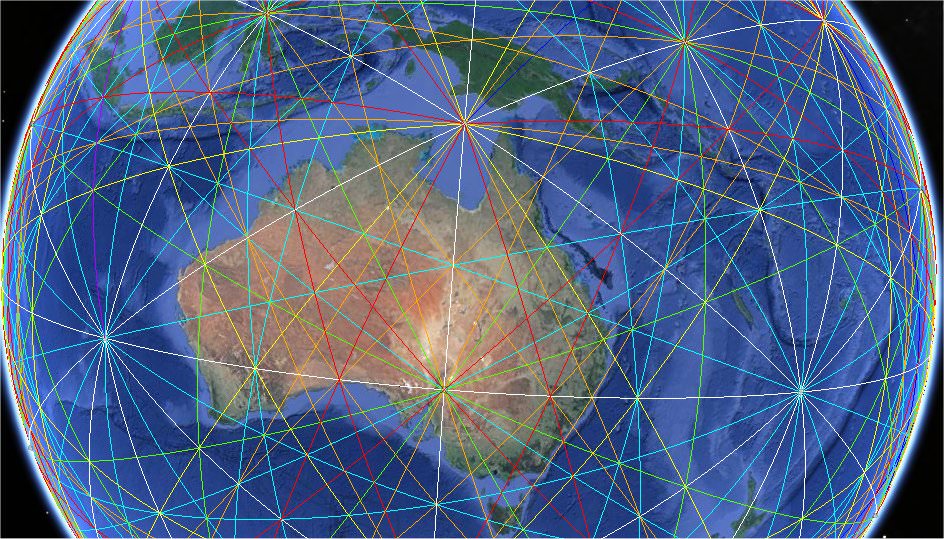 In fact many people have claimed to have felt the energy surge up their body, and some of them claim that they have blacked out as the surge was that powerful.

How Long Have Human Beings Known About Ley Lines?

Our ancestors have known about these lines for many hundreds of thousands years.

Every race and culture on the planet has known about these lines yet every one had different names for these lines. Many people here in the UK tended to think that the druids found these lines; this of course is complete and utter nonsense. All we need to do is to look at the ancient cultures of the earth.

Take the native Indians of the United States; they used to call ley lines spirit lines and their Shaman’s used to use the electro-magnetic energy in these lines to help them contact the spirits.

They even designed their medicine wheel on the spirit lines, as they knew that these lines followed a straight round line. How did they know about these lines and the energies that they give off? The answer’s simple: the sky Gods told them.

The aboriginal people of Australia called these lines dream lines, once again they claim that knowledge was passed on to them from the sky Gods.

Yes, ley lines can give off positive or negative energy.

Well if a coven have gathered and practiced black rituals they can blacken the line from giving off positive energy to negative energy. Is there any proof for this? Yes, in the nineteen seventies, in the small Yorkshire mill town of Todmorden, a coven practiced in a small woodland area in the district of Cornhome. The woodland has four ley lines running trough it.

After the coven had stopped practicing there, the wildlife had disappeared from the area and did not return till nineteen ninety-six, after white witches had performed several cleansing rights there.

Also, the occult and paranormal author Andy Collins in his book the Black Alchemist claims that the people of hex are going round blacking ley lines. And through them doing this lead to the gales and great damage that ripped through the UK in nineteen eighty-seven.

One interesting fact is that the Swastika stone on Ilkley moor in Yorkshire is the oldest known depiction of a Swastika in Europe. 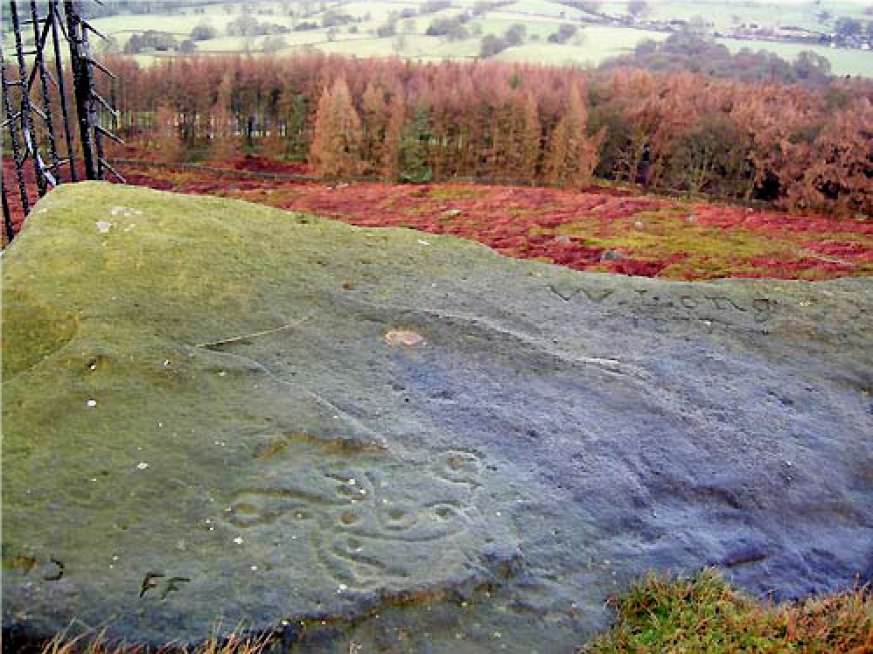 Swastika Stone : Ilkley. Map Ref: SE09554696.  Some think it likely, that the swastika was carved by one of the Lingones Celts during the Romano-British period. The cups in this design align north-south and east-west. The northern line points directly towards Simon’s Seat on the northern skyline. The eastern axis points directly at Almscliffe Crag, above which the equinox rises from here. This is probably the most famous carved rock on the moor,the Swastika Stone is generally considered to be later than the other carvings here and to date from the Iron Age.

The stone is believed to have over twenty ley lines intersecting through it.

A colleague of mine who reads Sanscrit claims that the Swastika on the stone is actually an old ancient Sanscrit of a Star/Planetary system map. That once again brings in the link to ley lines and the sky.

He also claimed that a Shaman would have used the rock in his ritual and religious ceremonies, and that it, with out doubt, predates the druids and their knowledge of ley lines.

How Does This Lead To The UFO/Abduction & Paranormal Connection?

As I now enter my twenty-first year of researching the UFO/Paranormal phenomenon, for the past fifteen of those years, I have started to notice how a lot of the phenomenon happens over areas saturated in ley lines.

At first I just thought it was all just coincidence. Then we I looked at the data I were collecting, by interviewing witnesses to these events. As well as during my research I read Maurice Crosse’s findings on the Enfield poltergeist and how he found that thirteen ley lines intersected the house. In his mind, that’s why the family were experiencing the activity.

I went back over all my cases with a fine toothed comb, and ninety- five percent of the sightings/activity all had taken place on ley lines. How can I prove this? Well, since being a young child I have been able to dowse for ley lines.

For my own piece of mind I brought in a gifted psychic whom I know, and took them to the sites to see what they could pick up.

Before I knew they had picked up that there were several ley lines running through the area, as they were in a trance like state, they point the lines out exactly where I had previously dowsed for them and found them. At no time did I tell them why we were going to the area. The only information I gave was that several people had been seeing an apparition at the site.

They even gave the description of the apparition, which had been witnessed there. We then went to two sites where UFOs had been observed. Once again they were drawn towards the ley lines first.

I also took them to places that didn’t have any ley lines and they confirmed that there were no ley lines there, yet the witnesses had observed something there. And they went into great detail as to what they had seen, though it was not as prominent as the things witnessed at the ley lines sites.

With this independent psychics’ findings, as at no time did I tell them what I was looking for, it confirmed what I was already beginning to suspect. Ley lines played an important part in what and why people were reporting more UFO/Paranormal events over ley line sites.

At this time I was investigating the many UFO sites over the Scammonden area of Huddersfield in West Yorkshire, as many people had reported seeing UFOs heading over to the area from the Todmorden and Halifax areas.

As my database grew, I decided to map out all the UFO/Abduction and paranormal reports on a map, and where the ley lines were.

I noticed how they formed a perfect equilateral triangle. From Scammonden to Todmorden through to Ilkley, I had the report and findings published in UFO Encounters magazine. The article was called The Yorkshire Triangle.

By this time my mind was made up strongly for the ley line link with the UFO/Abduction and paranormal phenomenon. All what were left for me to do was to find out why the phenomena are drawn to areas saturated with ley lines.

This is the first time that my conclusions have been printed, due to the fact that when I have given lectures on the phenomena and brought in the ley line connection, most of the people have gasped in disbelief. I only hope that you are more open minded to my ley line theory, than those who have heard it in the past.

I am not saying that it is a fact.

Only that is a big possibility that ley lines are drawing the phenomena to them as a magnet does iron filings.

As stated when I first came across the ley line connection, I thought it was coincidence for these things to happen where there are ley lines.

I checked all the sites and data I had collected over the years. Then I rechecked. I noticed that ninety-five percent of the incidents I had investigated happened where there are a heavy concentration of ley lines.

I asked myself why this were so? I realized how every ancient culture claimed that ley lines gave off positive or negative energy.