Skip to content
You are here
Home > The Real News > Can Humans Harvest The Sun’s Energy Directly Like Plants?

Much like photosynthesis in plants, can human beings utilize light and water for their energy needs? New evidence suggests that it may be happening right now in each cell of your body.

In response to the title question, my answer is a definite “maybe.”

On the positive side, a recently published paper by Herrera et al. (1) argues that the answer is yes. The authors pinpoint melanin as the central player in the drama of photosynthesis, arguing that melanin, a black substance prominent in certain tissues, absorbs all visible wavelengths. Those concentrated photons could then drive the photosynthetic process in the same way as photons do in green plants and many single celled organisms.

The authors focus on the eye, which absorbs abundant light. They address a mystery of ocular function that remains unsolved: the retina stands as one of the most avid of the body’s consumers of energy; yet nearby capillaries are remarkably sparse, and therefore seemingly unable to meet those energy needs. Herrera et al. argue that the missing link could be melanin, which exists in unexpectedly high concentration in the eye. If melanin were a light antenna, collecting numerous photons, then that concentrated energy could drive metabolic processes just as they do in green plants. Melanin could resolve the energy problem.

Melanin exists not only in the eye, but also in many tissues. In a comprehensive review, Barr et al., (2) discuss many relevant features of melanin that support the authors’ hypothesis. First, melanin is an ancient protein, which may have been present at the inception of life. Second, its distribution is ubiquitous not only within, but also among, living organisms. Third, melanin in brain tissue increases with ascent up the phylogenetic ladder, reaching a peak concentration in man; it is invariably found in the brain’s strategic, highly functional loci. And, melanin responds to light, with semi-conductive properties. Hence, the provocative idea that melanin may be centrally involved in transduction of light energy into chemical energy gains traction from this evidence.

Our own work lends strong support to the idea that humans exploit light energy. Although we have not studied melanin, we have studied in considerable detail another light-absorbing substance that exists in higher concentration in the human body: water. Given water’s simplicity and pervasiveness through nature, many presume that water must be completely understood, but in fact little has been known about how water molecules organize themselves, and especially how they respond to light — until recently.

Students learn that water has three phases: solid, liquid and vapor. But there is something more: in our laboratory we have uncovered a fourth phase. This phase occurs next to water loving (hydrophilic) surfaces. It is surprisingly extensive, projecting out from those surfaces by up to millions of molecular layers. And it exists almost everywhere throughout nature, including our bodies.

This newly identified phase of water has been described in a recent book (3). The book documents the evidence underlying the existence of this phase, and goes on to show how that phase explains many familiar phenomena in straightforward terms. A central feature is that the phase builds from light, i.e., from absorbed electromagnetic energy. The more light that’s absorbed, the more extensive is the phase.

The existence of a fourth phase may seem unexpected. However, it should not be entirely so. A century ago, the physical chemist Sir William Hardy argued for the existence of a fourth phase; and many authors over the years have found evidence for some kind of “ordered” or “structured” phase of water. The fresh experimental evidence cited in the book and many papers not only confirms the existence of such an ordered, liquid-crystalline phase, but also details its properties. It is more viscous, dense and alkaline than H2O and has more oxygen since its formula is H3O2.  As a result, it has a negative charge. And like a battery, it can hold energy and deliver that energy as needed.

The presence of the fourth phase carries many implications. Here, I outline some basic features of this phase, and then deal with several of those implications including the role of light and energy. I then focus on some biological and health applications. [Note: the video below will explain the fourth phase of water if you want a comprehensive, easy to learn overview.]

The energy for building water structure comes ultimately from the sun. Radiant energy converts ordinary bulk water into ordered water, building this structured zone. We found that all wavelengths ranging from UV through visible to infrared can build this ordered water. Near-infrared energy is the most capable. Water absorbs infrared energy freely from the environment; it uses that energy to convert bulk water into liquid crystalline water (fourth phase water) — which we also call “exclusion zone” or “EZ” water because it profoundly excludes solutes. Hence, buildup of EZ water occurs naturally and spontaneously from environmental energy. Additional energy input creates additional EZ buildup. 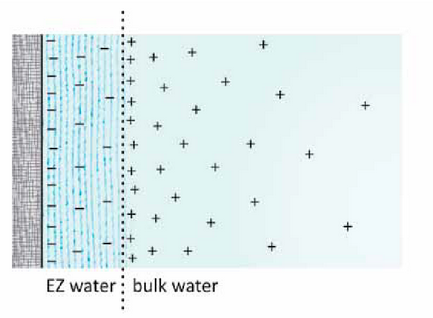 The stored electrical energy in water can drive various kinds of work, including flow. An example is the axial flow through tubes. Immersing tubes made of hydrophilic materials into water produces flow through those tubes (3), similar to blood flow through blood vessels (Figure 2). The driving energy comes from the radiant energy absorbed and stored in the water. Nothing more. Flow may persist undiminished for many hours, even days. Additional incident light brings faster flow (4). This is not a perpetual motion machine: incident radiant energy drives the flow — in much the same way that it drives vascular flow in plants and powers water from the roots to nourish trees taller than the length of a football field.

This energy conversion framework is rich with implication for many systems involving water. All that’s needed is water, radiant energy, and a hydrophilic surface. The latter can be as large as a slab of polymer or as small as a dissolved molecule. The liquid crystalline phase inevitably builds — and its presence must therefore play some role in the system’s behavior.

One example is…yourself. By volume, two thirds of your cells’ content is water. However the water molecule is so small that making up that two-thirds volume involves numerous watermolecules. If you count molecules, 99% of the molecules in your body are water molecules. Modern cell biology considers that huge fraction of molecules as mere background carriers of the “important” molecules of life such as proteins and nucleic acids. It asserts that 99% of your molecules don’t do very much.

However, EZ water envelops every macromolecule in the cell. So tightly packed are those macromolecules that little room exists for any but liquid-crystalline EZ water. Most of your cell water is EZ water. As elaborated in my earlier book (5), the ordered phase water plays a central role in everything the cell does.

What’s new is the profound role of radiant energy, which can power many of those cellular functions. An example is the blood flowing through your capillaries. That blood eventually encounters high resistance: capillaries are often narrower than the red blood cells that must pass through them; in order to make their way through, red cells need to bend and contort. Resistance is high. You’d anticipate the need for lots of driving pressure; yet, the pressure gradient across the capillary bed is modest. The paradox resolves if radiant energy helps propel flow through capillaries in the same way that it propels flow through hydrophilic tubes. Radiant energy may constitute an unsuspected source of vascular drive, supplementing cardiac pressure.

Why you feel good after a sauna now seems understandable. If radiant energy drives capillary flow and ample capillary flow is important for optimal functioning, then sitting in the sauna will inevitably be a feel-good experience. The infrared energy associated with heat should help drive that flow. The same if you walk out into sunlight: we presume that the feel-good experience derives purely from the psychological realm; but the evidence above implies that sunlight may build your body’s EZs. Fully built EZs around each protein seems necessary for protein folding and hence for optimal cellular functioning.

A second example of the EZ’s functional role is weather, which, as I will show, is not unrelated to health. Common understanding of weather derives from two principal variables: temperature and pressure. Those two variables are said to explain virtually everything we experience in terms of weather. However, the atmosphere also contains water: it is full of micrometer-scale droplets commonly known as aerosol droplets or aerosol particles. Those droplets make up atmospheric humidity. When the atmosphere is humid, the many water droplets scatter considerable light, reducing clarity; you can’t see distant objects as clearly as in drier conditions.

The Fourth Phase book presents evidence for the structure of those droplets (3). It shows that EZ water envelops each droplet, while hydronium ions occupy the droplets’ interior. Those internal hydronium ions repel one another, creating pressure, which pushes against the robust shell of EZ water. That pressure explains why droplets tend toward roundness.

How do those aerosol droplets condense to form clouds? The droplets’ EZ shells bear negative charge. Those shells should repel one another, precluding any condensation into clouds. Droplets should remain widely dispersed throughout the atmosphere. However, droplets do often condense into clouds, and the question is how that can happen.

The agent of condensation is the unlike charges that lie in between the droplets. Richard Feynman, the legendary Nobel Prize physicist of the late 20th century understood the principle, opining that: “like-likes-like because of an intermediate of unlikes.” The like-charged droplets “like” one another, so they come together; the unlike charges lying in between those droplets constitute the attractors (Figure 3). 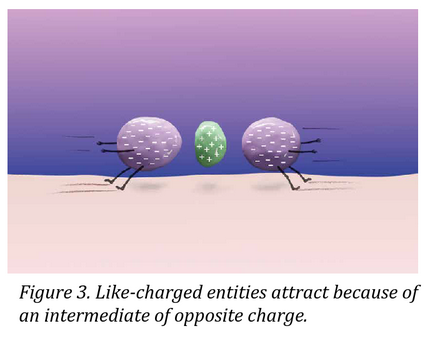 The like-likes-like principle has been widely appreciated, but also widely ignored: after all, how could like charges conceivably attract? A reason why this powerfully simple concept has been ignored is that the source of the unlike charges has been difficult to identify. We now know that the unlike charges can come from the splitting of water — the negative components building EZ shells, while the corresponding positive components, the hydronium ions, provide the unlike attractors in between. With enough of those attractors, the negatively charged aerosol droplets may condense into clouds.

The like-likes-like principle operates not only in clouds but also in our bodies. Wherever two like-charged substances exist, a good possibility is that they hold together because of the opposite charges lying in between. Since those separated charges build from the energy of light, one might say that the self-organization of biological materials comes ultimately from light, just as the blood flow in capillaries might also comes from light.