Comment: This is a rare moment in the geopolitical world where there is cause for celebration. When the illegal and murderous actions of a country, along with its psychopathic leaders are being restricted and neutralized, we think there may actually be justice in this world after all. Read on and observe how an Israeli journalist describes the current “bleak” situation for Israel, and how from now on they will have to be extremely careful before engaging in illegal military operations against other sovereign countries, otherwise they may find themselves being mauled by the Russian bear. 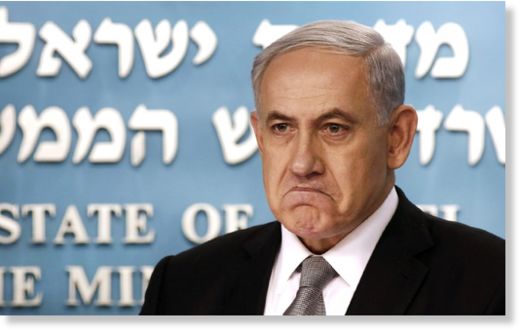 Israel will think twice and more before it decides to initiate air force attacks inside Syria – as it did at least 10 times in the past three years.

A gun placed on stage in the first act must be fired by the last one. This axiom is attributed to Russian playwright Anton Chekov – the same one whose work Minister of Culture Miri Regev proudly declared she has never read.

Even though it was clear that the extensive military buildup by the Russia Army in Syria was bound to eventually lead to military intervention in the civil war, the first Russian air strikes yesterday were received with a bit of surprise. Yesterday morning the Russia Duma (parliament) approved the use of military force – as if President Vladimir Putin really needed their approval – and yesterday by noon missions were executed near the towns of Homs, Hama, and Latakiya. According to Western sources, the Russians targeted positions of rebel groups opposing the regime of President Bashar Assad, including factions supported by the US. The Russian Ministry of Defense, on the other hand, said that its air force targeted ISIS.

Nevertheless, one can assume that Russia is trying to create a division of labor that is not to the liking of the US and its Arab and Western coalition partners assembled to fight on two fronts: the Assad regime and Islamic State.

The Russian logic is that the US-led coalition will attack ISIS and Russia will attack the rest of the rebel groups. Regardless of whether such a division will be in place de facto, one conclusion is emerging: the big winner of the new situation is Assad and his failed regime.

There are already indications that his self-confidence is growing due to the newly formed supportive coalition of Russia, Iran, and Hezbollah and partially the Iraqi government to save his neck.

The big losers are the US, its Arab and Western allies, and Israel, despite reports that Russia informed Washington and Jerusalem in advance of its air missions. Israel is among the losers, notwithstanding boasting by Defense Minister Moshe Ya’alon on Tuesday that Israel doesn’t need to coordinate its actions in Syria with Russia. Really? If so, then why did Prime Minister Benjamin Netanyahu himself travel with the chief of staff and head of military intelligence to meet in Moscow two weeks ago? And why is the deputy chief of staff traveling next week to meet with his Russian counterpart? Of course, to have talks on “deconfliction” to avoid accidental clashes between Israel and the Russia armies.

Yet regardless what Israeli officials say, they will not be able to conceal the fact that Israel’s previous unstoppable freedom of action and maneuverability in Syria is now restricted.

Comment: A bummer, isn’t it? Until now Israel could violate Syrian space whenever it wanted to. But now here come those pesky Ruskies with their advanced military airplanes and fancy S-400 air defence system, and suddenly the IDF can no longer do whatever it wants. Oh, the chutzpa!

As Russian sources indicate, both Israel and the U.S. have very good reason to be upset:

On Friday, 2 October, Saudi news published an interview with former U.S. Colonel Jack Jacobs, who announced that the United States can’t stop the Russians in Syria, as Russia has established a “closed zone” over it. This means thatany military aircraft entering the zone of hostilities can be immediately shot down as a threat to the Russian Air and space forces.

Thus, the U.S. and its allies can’t even carry out reconnaissance on the forces of the Russian Federation.

A source in the military circles of the American contingent in Turkey reported that NATO aircraft, trying to get close to the forces of the Russian Federation, were illuminated by radar, while the source of illumination could not even be identified.

“The Russians have made it understood, that they can see everything, and not to get anywhere closer, or be shot down”, – noted the American military.

“Frankly speaking, we were surprised by the air defense system of Russia. We can’t even assume which systems are deployed there. We are encountering them for the first time, most likely there are the latest complexes S-400. I have no more clues” – said Colonel Jack Jacobs.

Bloomberg also writes about the creation of the Russian no-fly zone over Syria, citing senior American military. So, the commander of the NATO forces in Europe General Philip Breedlove stated that the new military infrastructure of Russia in Syria, including the air defense systems, de facto creates a no-fly zone.

According to Breedlove, Russia has created over Syria a “sphere of denial”, which American planes can’t enter.

It doesn’t mean necessarily that the IDF will not be able to respond in the future – as it did earlier this week to shells or rockets mistakenly or intentionally launched from Syria or to prevent terrorist attempts to penetrate the Golan Heights.

But surely Israel’s pulling the trigger will not be so easy from now on. Israel will think twice and more before it decides to initiate air force attacks inside Syria – as it did at least 10 times in the past three years.

Yet the question of what Putin’s real goals are and what his grand strategy in Syria is, if he has one, puzzles Israeli and Western experts. All of them agree, however, that on the surface it seems that Putin hopes to achieve the following aims: to help Assad to consolidate his regime, even if it means allowing him to control only his “little Syria” fiefdom – or by a different name his “Alawaitestan;” to ensure Russian access to warm water ports in the Mediterranean; to safeguard Russia’s last bastion and stronghold (Syria) in the Middle East; to enable Putin to conduct a confrontational foreign policy against the US; to leverage Syria as a bargaining chip for Russia to enhance agreements across the board – Ukraine versus Syria, for example – between world powers and to divide parts of the world to spheres of influence and interest, as it used to be during the cold war era; to contain ISIS – Putin may not care that the Islamic State controls chunks of Syria and Iraq, but he doesn’t want it to advance in the direction of his back yard – the former Soviet- Muslim republic in Central Asia; to avoid sending “boots on the ground” to fight in Syria – for this purpose Putin has Hezbollah, Syrian and even Iranian- sponsored Shiite mercenaries to be used as cannon folder.

Comment: It’s very entertaining to observe how pathological minds try to assign their own intentions and motivations to others. Contrary to Israel, the U.S. and their allies, the Russians are quite honest about their reactions to various events and occurrences, and give clear warnings to anyone who can take a hint, and tell the truth a lot. But that is difficult to parse by psychopathic minds that are always looking for the double-cross or taking the pejorative view.

Russians tell the truth, just not too much, and keep their cards close to their chest. 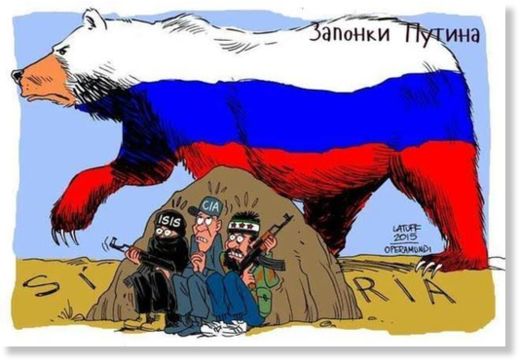 Despite being an authoritative ruler, he doesn’t want Russians to be returned in body bags to military funerals across Russia. He knows the lessons of the Soviet-era war in Afghanistan.

From all of the above, it is also clear that the bloody civil war that has already caused the death of more than 250,000 Syrians will be prolonged because of Russian involvement, at least in the short term. Still, one should not rule out the possibility that in the long run Russia’s entry may enhance the chance of a political-diplomatic settlement in which Assad will remain in power for a transition period and eventually step down.

Against the background of negative ramifications on Israel’s security posture, there is a possible positive side, although it is not politically correct to express it: the continuation of the war benefits Israel by enhancing its standing as an unmatched regional power, while Hezbollah and Iran are weakened by their involvement.